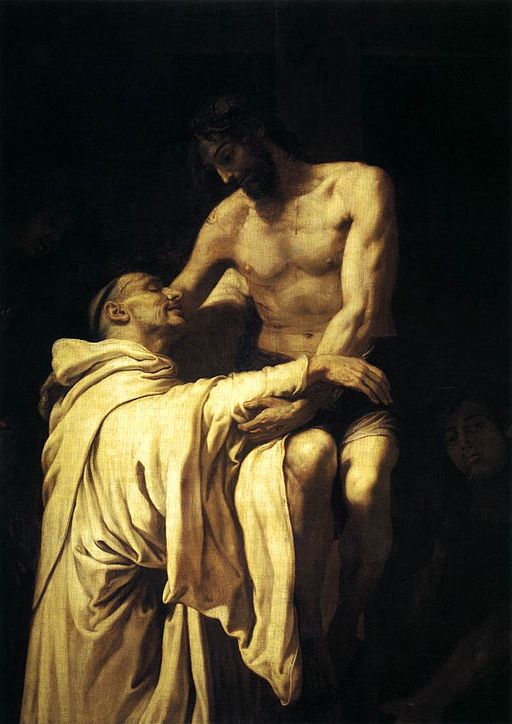 I rather like Cardinal Haimeric’s put-down, when he thought Bernard had been meddling in matters above him, ‘It is not fitting that noisy and troublesome frogs should come out of their marshes to trouble the Holy See and the cardinals.’ But I like even better the response Bernard made, which disarmed Haimeric and showed the true monk, ‘Forbid those noisy troublesome frogs to come out of their holes, to leave their marshes . . . Then your friend will no longer be exposed to the accusations of pride and presumption.’

St Bernard possessed, to a unique degree, a capacity for making friends of his enemies and, sometimes, let’s be honest, enemies of his friends. He is undoubtedly one of the great glories of monasticism — a man on fire with God, capable of immense lyricism, but with a strange, fierce zeal that leaves many uncomfortable today, as it did in the twelfth century. I wrote of him once

He wrote like an angel, especially when he was angry (which was often). His Latin is as near to French prose as anything  I know, and there are times when he manages to say nothing and say it very brilliantly as most French writers do (no racist slur there). He was beastly to Abelard (who actually wasn’t very nice and certainly no romantic)  and he is usually condemned for preaching the Second Crusade, yet Bernard was kind to Jews at a time when no one was kind to Jews. Indeed, in the early fourteenth century we find a rabbi in Cologne recalling the help and protection afforded by the abbot of Clairvaux, so at least his reputation for good survived him (he died in 1153) instead of being interred with his bones, as is often the case. He had a great love of family and inspired lasting affection in those who knew him, yet he was not exempt from criticism. . . .

Bernard has been called a protestant avant la lettre because he did not hold the doctrine of the Immaculate Conception of Mary and because his understanding of  justification was often quoted by Calvin in his exposition of the sola fide principle. ‘Our words are ours, their ends none of our own.’ Bernard is scarcely to be blamed for any interpretation put upon his words in after centuries. No one could really accuse him of lacking orthodoxy. In his lyrical writing on the Blessed Virgin Mary, he himself admits that he sometimes runs on a little too far. Pius XII proclaimed him a Doctor of the Church and called him the ‘last of the Fathers’, but perhaps his best memorial is the fact that his name has become synonymous with the Order he did so much to foster. He was involved in the foundation of no fewer than 163 monasteries in his lifetime. At his death, the Cistercians, the first true Order in the Church, numbered 343 communities. Even today, in Spain, you will hear the Cistercians referred to as ‘los bernardos’. . .  .

But what about that ‘noisy and troublesome frog’ charge? Many people assume that a monk, especially a Cistercian, should lead a life of silent seclusion, never venturing an opinion on anything and certainly never engaging with any of the important political or ecclesiastical issues of the day. I think St Bernard shows in the twelfth century as, mutatis mutandis, Thomas Merton was to show in the twentieth, that it is precisely because a monk must live a life of prayer and asceticism that he is able to speak on matters outside the cloister. There is no contradiction. If the prayer becomes less earnest, less intense, and the search for God ceases to hold first place in his heart, the monk’s ability to speak will lessen also. When we chose as the strapline for this blog ‘The world seen from the cloister’ we were conscious of both the limitation (the partial view it implies) and the obligation (to pray unceasingly, to put God first) the phrase expresses.  We cannot hope to serve others unless we put God first. Nihil amori Christi praeponere, said St Benedict, ‘Prefer nothing to the love of Christ.’ St Bernard did exactly that.

Note on the illustration
This is my favourite image of St Bernard, Ribalta’s Cristo abrazando a San Bernardo. When I lived in Madrid I used to go and visit it every Sunday morning in the Prado.