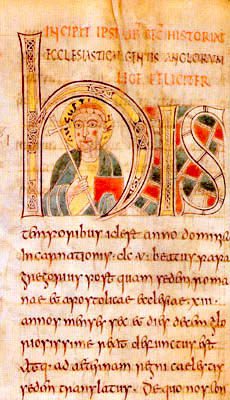 Christ was his King. No other lord
Did Bede aspire to serve.
No other love could claim the heart
He gave without reserve.

From boyhood onward his delight
Was in the scriptures found,
Or singing praise to him who hung
Upon the Rood, thorn-crowned.

Like Easter night, Bede’s quiet cell
Saw Christ arising there;
And when Ascension dawned at last
The Son shone bright and fair.

To Christ the King of glory sing,
And God the Father praise,
Whose Spirit dwells in peaceful hearts
And guides them in his ways.

If you enter Bede’s name in the search box in the sidebar, a number of posts about him will be indicated.

Illustration
The St Petersburg Bede (Saint Petersburg, National Library of Russia, lat. Q. v. I. 18), formerly known as the Leningrad Bede, is an early surviving illuminated manuscript of Bede’s eighth century history, the Historia ecclesiastica gentis Anglorum (‘Ecclesiastical History of the English People’). It was taken to the Russian National Library of St Petersburg at the time of the French Revolution. Although not heavily illuminated, it is famous for containing the earliest historiated initial (i.e one containing a picture) in European illumination. The opening three letters of Book 2 of Bede’s history are decorated, to a height of 8 lines of the text, and the opening ‘h’ contains a bust portrait of a haloed figure carrying a cross and a book. This is probably intended to be St.Gregory the Great, although a much later hand has identified the figure as St. Augustine of Canterbury. Dated c. 731 – 746.